It would be really hard. Not only because I would mix up between “best” and “favorite”, but also I have not seen enough (classic especially) movies. Now this list below should be considered as an on-going list and if you wonder why there are some classic performances missing, that’s probably because I haven’t seen it or maybe because I am in the minority for not liking that performance (One example is Robert DeNiro in Raging Bull).

Just for the fun sake of it, here’s the list of Best Male and Female Performances of All Time according to me:

10 Best Male Performances of All Time:

10 Best Female Performances of All Time:

1. When a character is talking while driving and doesn’t pay attention to the road.

I remember watching Alfonso Cuaron’s Y Tu Mama Tambien and there is a scene where the three characters are on a car for a trip. One of them is driving (duh) and they are having a conversation and even more Cuaron films that scene in one long take. I bring up this film because it is an example where the driver talk and drive as if they are really on the road. There are films where the characters turn their heads for a good amount of time that is enough to get them into an accident. Unless that is the film’s intention to kill off the character, please drive safely.

2. When a villain gives a monologue or waste time by screaming and etc. before killing someone.

One recent example that comes to mind instantly is SPOILER in The Dark Knight Rises where Marion Cotillard’s character reveals her true identity. Her character spends a good time either before or after –I don’t remember this– she stabs Batman. Either way, it’s not realistic and stupid. When you want to kill someone it means you hate the victim, so why bother explaining your reason and or teaching them you evil plan?

3. When the family members have different accents.

I’m no expert when it comes to identifying accents, but there are movies where the mother is speaking with British accent and the daughter is using American accent. Unless they are actually not blood-related, this is unforgivable. If the family members don’t look alike to each other, that is still understandable because I think it’s hard. But to tell the actors to use the same accent, it’s not that hard. It’s a must. Either you use one accent, or you don’t.

4. When the character makes irrational decision.

“But movie characters are just like us, they have flaws!” “Maybe they forget” “That’s the writer’s intention” Unless the character is a robot or an alien, I expect them to make humane decision. I don’t expect them to be perfect, but sometimes writers modify the characters’ decision so that it fits later scene or the storyline. One example comes to mind is in Prometheus where Noomi Rapace’s and Charlize Theron’s characters are running away from gigantic U-shape space plane rolling towards them. I know that it’s critical life and death moment for them, but if you are really running away from that thing you should run to other direction but in front of the killing thing.

5. When an emotional scene accompanied by rousing score to make us either feel sad or lifted up.

This happens mostly in Steven Spielberg’s score and the guilty party is John Williams, but there are other recent movies that shamelessly try to make us cry or feel sad and pity. Example is The Impossible starring Naomi Watts, it’s a very emotional film that even without using music score it’s still gonna be awfully sad. But the film uses sappy score for its emotional scene that you really notice its presence and what it’s trying to do to you. Sometimes the score also tries to make you feel inspired or lifted up and an example is The Amazing Spider-Man where later in the film construction workers are moving the cranes so Spidey can swing away faster. Not only it’s stupid, but it’s also a scene where Spidey finally comes back to save the day and in the background there is a music score that is not only so bothering, but also identifiable on who the composer is, none other than James Horner.

Although Gattaca is a sci-fi film, it doesn’t rely heavily on special effect. The production design already makes up for it and that’s why it was nominated for Best Art Direction at the Oscar. But another thing that makes this film one of the best looking sci-fi films ever is the cinematography work by DP Slawomir Idziak whose only Oscar nomination is for Black Hawk Down.

His wide shots show us the perfect surroundings the characters live in. It evokes the feeling of desire but how shallow the society is in this film. With his medium close-ups, Idziak successfully makes us feel empathy towards the characters. And with his extreme close-ups like the opening sequence, he shows us what important players they are these  shredded skins, blood, fingernail, and eye-lashes. Gattaca is stunning sci-fi film by director Andrew Niccol and with the help of his production designer and also cinematographer, this film becomes a haunting sci-fi film. 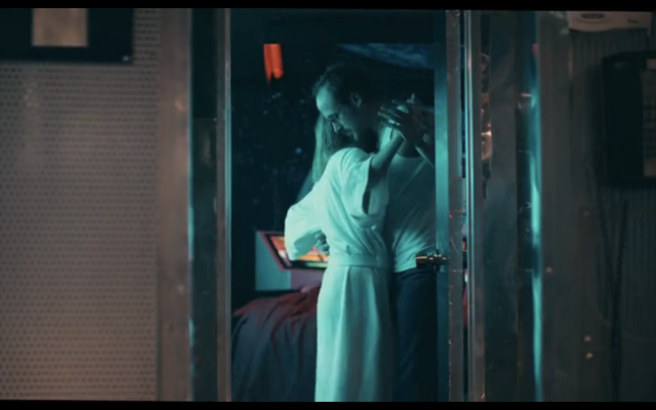 When one movie hits you, the images will linger for long time. That’s the case for Derek Cianfrance’s Blue Valentine starring Michelle Williams and Ryan Gosling as a couple who in the film is pictured to fall in and out of love.

The movie is divided into two parts, past and present. The love they have in the past is undeniably very sweet and romantic. On the opposite, they have a very rough time to rekindle their romance in the present with them having a daughter. In one occasion, Gosling’s character takes out Williams to a motel and stay in the “future room.” You just can see it in their faces how exhausted they are, tired from work and also from each other.

It’s their chance for their most romantic moment in a very long time. Dean turns on the tape and “You and Me” by Penny & The Quarters is playing. Cindy who is just from the shower (both of them have just taken a shower together actually) sees her husband being seductive and all playing their special song. Cindy is being lured. They drink together and Cindy finally thinks a cigarette won’t hurt. It all feels good. After some bitter scenes in the film before, I think can they be like this until the end of the film?

Then we can see both of them dancing together. It’s like a peek of them through the door. This scene also shows how perfect the performance both actors give in this film. Flawless, it is. However, it’s also heart-wrenching. Why? Because the scene after this is not so romantic or eventually it’s the opposite. It goes darker. After the film ends, if we go back to this scene, it hurts to see what they have become.

Anyway, Blue Valentine is one of the best movies in 2010 and this scene deserves a mention on this blog. 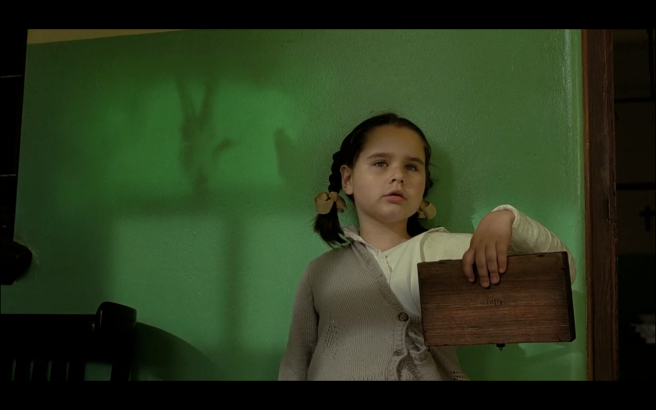 Tarsem Singh’s The Fall is known for its beautiful cinematography and rich color palette. The story is about a stuntman named Roy who befriends with a young girl in hospital while he’s resting to heal his wound. In this scene, the stuntman played by Lee Pace is trying to get the young girl’s attention played by Catinca Untaru.

This particular scene is actually short, but it shows the strong and amazing work in the film’s cinematography department by Colin Watkinson. In the room on his bed, the stuntman is calling the girl, Alexandria to come. Alexandria hesitates during his first meeting with the man. She shies away standing against the wall then realizes there is  horse outside. The way this film introduce the horse to Alexandria is brilliant. While Roy is calling and persuading the girl to come in the background, Alexandria is lost awed by her anticipation to see the horse. She sees the reflection of the horse coming through a tiny hole on the door. And when the door opens, it feels like a moment of beauty unleashed.

The film soon will tell about Alexandria’s fascination of horse. But this short scene is repeatable just to see the breathtaking cinematography.

Do you know that this movie is the first to be digitally altered for its color? It’s also the first to be done so that got nominated for Best Cinematography at the Oscar. The filmed was shot in Mississippi and South Carolina where at the time it was all green. Since the Coen Brothers wanted the film to look dusty, the film was digitally mastered to give it a sepia tone. Roger Deakins used Spirit DataCine for scanning at 2K resolution, a Pandora MegaDef to adjust the color and a Kodak Lightning II recorder to output to film, if you want to know.

Another trivia is that I really liked George Clooney in this film. I liked him more when he did comedy works. Unlike his works in Syriana, Michael Clayton, and Up In the Air I prefer to watch him in this film and one like The Men Who Stare at Goats.